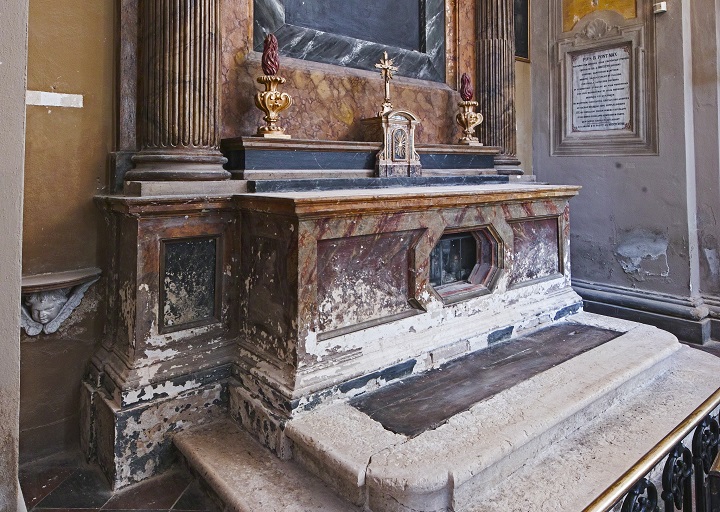 For centuries, religious and secular patronage enabled us to admire works of art that may otherwise not have been created nor suitably preserved. While this kind of support has unfortunately withered in the modern age, there are still patrons such as Massimo Andalini, who has been supporting culture in the Ferrara area for years. His company Pastificio Andalini has been making pasta with simple, natural certified ingredients since 1956 combining tradition with new technologies and awareness.

Among the many initiatives supported by Andalini, the most recent are well worth a mention, such as the support of the “Luce concreta” exhibition of Cento artist Salvatore Amelio, set up at the City Museum in Rimini; the donation of pewter musical instruments to students at the Istituto Comprensivo 4 Music School in Corporeno di Cento and the restoration of the Chapel of San Carlo della Basilica in San Biagio di Cento.

The Chapel of San Carlo, originally known as the “Sacra Famiglia” (Sacred Family) due to the particular interest of archpriest Girolamo Baruffaldi, was restored in 1750 as part of the overall renovation of the San Biagio Basilica by the architect Alfonso Torreggiani with the support of Bologna archbishop Cardinal Prospero Lambertini, who went on to become Pope with the name of Benedict XIV.

In 1971, on the initiative of Monsignor Salvatore Bavera, a magnificent early painting of Guercino depicting “San Carlo Borromeo in Prayer” (1613-14) taken from the Church of Santa Maria Addolorata dei Servi in Cento was placed over the altar. The chapel became known as the “Chapel of San Carlo” from that moment on.

The precarious conditions of the chapel - the plaster was damaged by infiltrations, the embellishments made in 1750 by the Bologna painters Antonio and Gaetano Raimondi were blackened and had been touched-up several times and there was damage inflicted by the earthquake of 2012 - led to a radical restoration to bring back the building to its original state in compliance with the provisions of the Ferrara Superintendence for the Artistic Heritage. All painted surfaces were cleaned and then an accurate stratigraphic survey was performed to identify the original colours. The intervention ended with the consolidation of the colour and plaster, the filling of the missing parts and pictorial integration.

Restoration activities started in December 2018 and were performed by Licia Tasini’s workshop in collaboration with Cinzia Orlandi. Architect Alberto Ferraresi was the project manager and Professor Salvatore Amelio was the historic-artistic consultant.

“We basically performed a substantial restoration of an artefact that testified to the local historic, artistic and religious heritage which, thanks to the support of Pastificio Andalini, will be passed on to the future generations in its original condition,” states the company proudly.