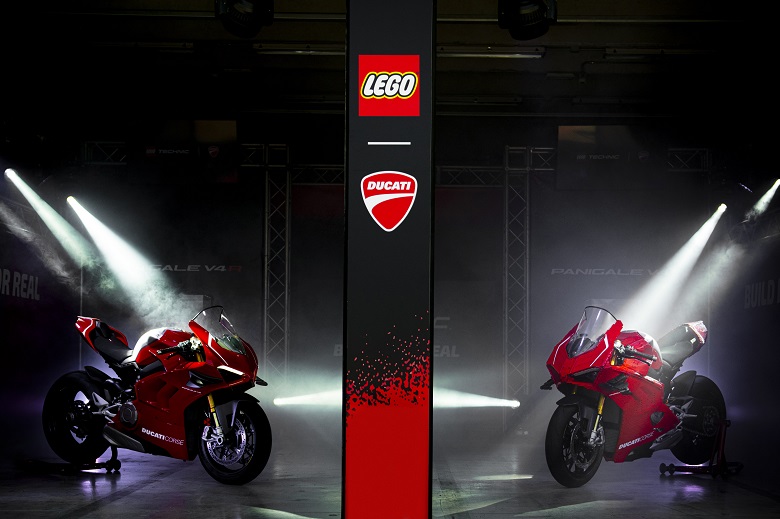 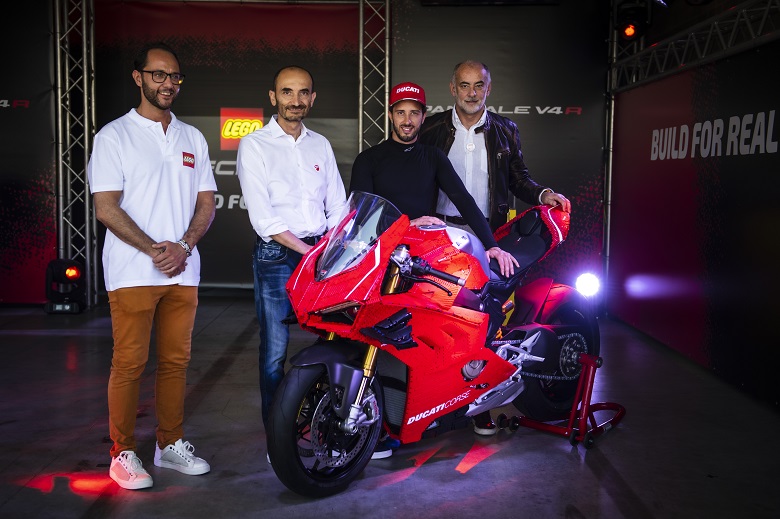 A few days after the launch on the market of the LEGO® Technic™ Ducati Panigale V4 R set, Ducati and LEGO Italia have amazed us again presenting the only model in the world of the Rossa from Borgo Panigale (Rossa di Borgo Panigale) in a 1:1 scale, made of LEGO® Technic™ bricksby the artist Riccardo Zangelmi. Riccardo, in his absolute debut with Technic elements, built the 1:1 model completely by hand, working for 400 hours.
The Panigale V4 R and its "twin" model made of LEGO® Technic™ elements with incredible skill by the only Italian artist, who has been recognised as a "LEGO® Certified Professional", were placed side by side on 19th June at the Modena racetrack. Special guest at this event was Andrea Dovizioso, official rider of the Ducati MotoGP Team and LEGO Technic bricks enthusiast, who, together with Claudio Domenicali, Ducati CEO, and Paolo Lazzarin, General Manager at LEGO Italia, unveiled the special version 1:1.
“I am very happy as I never imagined I would be unveiling a motorcycle like this. Each one of us, at least once in our life, has played with LEGO bricks, but seeing a replica of the Panigale V4 R up close is something incredible and at a higher level. I congratulate the LEGO artist Riccardo Zangelmi for making such a faithful and detailed replica of the Ducati motorcycle. Surely many will have fun riding it”, said the rider of the Ducati MotoGP Team Andrea Dovizioso.
Riccardo Zangelmi, who has been creating works of art in bricks for years, and who used LEGO Technic for the first time on this occasion, was enthusiastic about the end result: “Participating in this LEGO Italia and Ducati project was the most exciting professional challenge I have ever faced. I went beyond my limits and won by crossing the finish line as a team. I approached the project as an official rider of the Borgo Panigale-based brand would have done, pushing hard on the track, searching for the limits and overcoming them. I am the first to look at the two bikes today, side by side, and I am happy to have caught the DNA characterising both LEGO Technic and Ducati, recreating the motorcycle symbol of Italian excellence in bricks.”
This was the perfect occasion also to celebrate the arrival on the market of the long-awaited 42107 LEGO® Technic™ Ducati Panigale V4 set, created by the LEGO Group for both enthusiasts of bricks and of the two wheels. The model measures 32 cm in length, 16 cm in height and 8 cm in width and is the first motorcycle model in LEGO Technic's history to include a gearbox to simulate the different speeds and driving techniques. Other striking features are the steering head, the suspensions that give a realistic movement, other than the front and rear disc brakes. The stand, exhaust pipe, windshield and dashboard represent the small details that make this motorcycle so faithful to the real version. Last but not least, the colour red that makes the heart of any Ducati freak skip a beat.

The LEGO® Technic™ Ducati Panigale V4 R model is suitable for brick enthusiasts from the age of 10 and is on sale in the LEGO Store, online at https://www.lego.com/it-it and at all the best LEGO dealers starting from 1st June and at the price of 59.99 Euros. The new set can also be purchased at Ducati dealers as a result of a licensing agreement, which has recently been signed between the LEGO Group and the Ducati Motor Holding S.p.A.